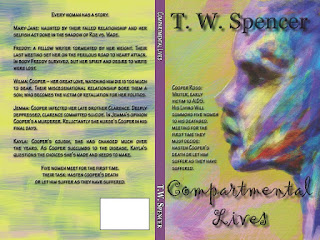 Here is a sneak peak at the cover for my new novella "Compartmental Lives."
Be sure to read the 1000+ word excerpt from the novella in the previous post.
Posted by T.W. Spencer at 7:48 PM No comments:

Haven't been here in a while. An Only Child has been put on hold for now. I just haven't been satisfied with the manuscript, so I decided to step away from it for a while.

But don't feel cheated. I have been working on my next book, "Compartmental Lives," another collection of short stories. Together the five stories are told by five different women about someone they all knew at a defining point in each of their lives.

This is the front cover tagline for the book:

Cooper Ross: Writer, early victim to AIDS. His Living Will summons five women to his deathbed. Meeting for the first time they must decide: hasten Cooper’s death or let him suffer as they have suffered.

Below is an excerpt from Wilma's Folly one of the stories within Compartmental Lives. If you would like to read Wilma's Folly in its entirity click the link above or here http://spencers-lane.blogspot.com/p/wilmas-folly.html

Here is the 1000+ word excerpt from my forthcoming 35,000 word novella Compartmental Lives:

The Roxbury group met every Wednesday, just off Blue Hill Avenue in the back of Mr. Williams’ barbershop on the corner. They talked for long hours discussing and trading stories of their latest put down or slight. “It’s necessary,” Sister Williams always says, “to get it off your chest and out of your system. That way we can all think clearly and proceed to an adequate solution to our collective problems.”

But this Wednesday, August 28, 1963 the meeting was being held on the bus, and everyone was elated. The bus trundled down Interstate 95; the constant whir of wheels on macadam a nearly unnoticeable undertone of the never ending hymns led by Sister Williams. Raymond and his wife, everybody called her Sister, kept the spirits of the group alive. Even when Wilma herself thought she couldn’t bear being pregnant anymore, they were there keeping her delicate spirit afloat. I don’t know how she keeps from losing her voice.

Because of her condition, Sister Williams insisted Wilma sit towards the front. “Just in case we need to stop so you can take care of your business girl. We don't want any accidents on the bus.” Sister had said with a hearty motherly laugh.

Wilma smiled her assent; gingerly lowering her eight months pregnant body onto the seat. Wilma had always been a thin person, even though she had a near full term child swirling above her loins, no one could claim her large. Wilma didn’t take up much room on the bench seat, and so Doris Hopkins sat down beside her.

“Momma, if I have to go you’ll need to get up,” Wilma said with a smile.

“I know that I carried you didn’t I? You had me rushing off to the bathroom every five minutes.” Doris chuckled.

“Momma, don’t talk like that in front of everyone,” Wilma said blushing.

“Why? They all know, why do you think they want you up here?” Doris protested.

“Ain’t that the truth,” Sister Williams chimed in, “My Tyrone was a big baby.” As if anyone who saw Tyrone’s six foot seven, two hundred and fifty-pound physique wouldn’t have guessed. “The big ones wear you out with all the back and forth.”

Now, after having to stop five times on route so Wilma could waddle into the brushes, they were finally here and soon they would see him. Wilma didn’t know if she could take it, walking anywhere for any length of time made her tired, but she intended to try. They pulled into the prearranged parking area, which turned out to be the playground of an elementary school near Howard University. They got off the old white bus; its paint peeling and rust dotting the haul like blight. Wilma stood in the gleaming August sun. The dry blistering heat is beating down on her; evaporating her confidence, creating fissures in her resolve. I’m going to do it, even if I pass out from the effort.

In spite of the oppressive heat, the parking lot swarmed with jubilant rally goers all waiting for a shuttle bus to take them downtown. Wilma leaned against a pole, positioning herself within the minimal strip of shade. The air was stifling. After the shuttle’s arrival, Wilma stood first in line and was delighted to feel chilled air wash over her when the door slid open. Air Conditioned; what will they think of next.

Yes, it was a cliché, but it was appropriate. She only experienced conditioned air on the rare occasion that she went to a fancy building in downtown Boston. That isn’t often.

She stepped into the shuttle and took the first bench seat just like before. The air cooled her, calmed her, let her mind rest. The ten-minute ride lifted her spirits, only to have them dashed when they arrived at the drop off point; nearly a mile from the Lincoln Memorial. We won’t even be able to see Reverend King. The Capital building loomed behind them its bright-white dome gleaming in the too-bright August sun.

“What are we gonna do? You all want to walk as far as we can through this crowd?” Sister asked.

Before the others could answer, Wilma started to waddle away.

“Where are you going,” Doris asked.

“I didn’t come all this way to stand so far away. I came down here to hear and see the Reverend Martin Luther King speak.” Wilma yelled back as the others fell into step behind her.

As they walked determinedly winding their way through the growing crowd; sweat drenching her blouse. Payment for the exertion, but Wilma moved without looking back. The needle point of the Washington Monument pierced the unrelenting glare of the sun creating a shadow spire spearing a thin swath over the growing crowd. It allowed a small respite from the broad expanse of the sweltering, sun-drenched Mall. Wilma headed for the shade using it as a compass to traverse the Mall.

When she reached the crest of the hill at the base of the monument, Wilma realized that she had lost her group. At some point, they must have lost track of her in the crowd – which had grown in proportion to its proximity to the Lincoln Memorial – and she could not see anyone she knew anywhere. Wilma decided to move on and catch up with them later. She had to be more aggressive. They’ll let a pregnant woman through. She took a deep breath of the hot stale air, dabbing at her brow with a handkerchief that Sister had given her. Hoping against hope that bout of nausea roiling in the pit of her stomach was butterflies, excitement about seeing Reverend King.

Wilma swam deeper and deeper into the ocean of people. The massing crowd, squeezing and compresses into one sweltering collective of single-mindedness quietly demanding to be free of oppression. A multi-hued sea of faces, swirling around an island oasis of Reverends, movie stars, singers – pop, folk, opera, gospel – of the day. The Great Man himself standing calmly proud and confident on the dais; behind him, the greatest man – carved of marble stoically sitting – that ever walked on America’s blood-drenched soil. And from the moment those first four words of his speech were delivered with quiet strength, echoing Lincoln words, Wilma’s heart soared.

Her mind filled with dreams and possibility. Her soul danced to the musical cadence of his words. When she looked back at this moment, it would be this sweltering summer that gave unfathomable depth to his words, singing a soothing song of content. When by the end, those last five words were received with unrestrained, uproarious joy and applause; the heat blanketed Wilma. Hand to her head, trying unsuccessfully to stave off the dizzying euphoria. The child to be named Kenneth announced his impending arrival by drenching Wilma pelvis to ankles.

That was when one last truth descended upon Wilma’s increasingly disoriented psyche. She noticed one of ‘our White Brother’s’ that Mr. King spoke of for the first time since she and the others had arrived. He said, “Miss, are you OK,” and reached a hand for her just as she, stumbled, lost her balance, and it all faded away.

The giveaway over at Goodreads is now over. 10 lucky winners are going to get a free copy of my book 'A Brief Moment in Time.' This the second giveaway this year. The first garnered 305 entries for ten copies. This giveaway was far more successful, having 511 entries to win ten books.

An Only Child is so close to being finished. I am still inline for the 4/30 release. Soon you will see a pre-order for the book on amazon and Smashwords. Keep checking back for new updates.

Will be picking up  Zephyr series. I'm looking forward to get Volume I stared. Volume I, II, II are respectively called Winds of Change, Forest of Stars, and Sand of Doom. The first book in the series is tentatively titled Captivation. The entire series will grow to a total of nine books, 3 volumes of 3 books each: It is a very ambitious undertaking for me, but the story is there and I have to get it out of my head.

Talk to you later,

Next book in the pipeline nearly ready!!!

An Only Child, the first novel in my three book thriller book series Only Child, is ready to go to the editor. Now I'm going to start working on the cover art. I'm still on track for the 4/30 release.

Click below to get a free copy of my collection of short stories A Brief Moment in Time. Don't wait!


See the giveaway details
at Goodreads.

I'm running a giveaway over at Goodreads. Click over and get in the running.


See the giveaway details
at Goodreads.

Get A Brief Moment in Time for just .99 at Smashword with coupon code NF48J.

Buy the book now at https://www.smashwords.com/books/view/461095

I just got an amazing review from Amos Lassen. The review is titled "That Moment." Here are a couple of quotes from the review,
"I must say I was mesmerized by what I read....," Amos Lassen
"Spencer can very well be at a catalyst for the changing face of the short story. I recommend that you get a copy of the book before he becomes too famous. He has a list of writings that he is working on and I do not think he will be unknown for very long." Amos Lassen

Amos Lassen is a reviewer of books and films of interest to the GLBT and Jewish communities. He manages the Facebook pages Literary Pride and Cinema Pride and the blog Reviews by Amos Lassen where you can read the full review.

Also, the print version of A Brief Moment in Time will be out before the end of the month. Look for it! There is an extra story that does not appear in digital edition.

Visit me on LibraryThing